Dipshit of the day: Another turd with a badge 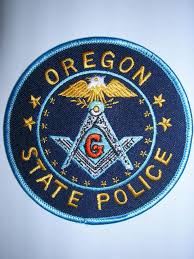 An Oregon State Police detective who investigated a killing spree involving a pair of white supremacists was sentenced Friday to 18 months of probation after pleading guilty to forgery and official misconduct related to the case.

As part of the plea bargain, David Steele also resigned and was fined $300. He apologized in a statement read in court by his attorney. The statement provided no explanation for his conduct.

Steele was the lead investigator into the nine-day rampage in 2011 of Joey Pedersen and Holly Grigsby that claimed the lives of Pedersen’s father and stepmother, an Oregon teenager the couple mistakenly thought was Jewish, and a black man in Northern California.

In a supervisory opinion released this summer, the trial judge in the federal case said Steele withheld and destroyed evidence, backdated reports, and listened to confidential defendant-attorney calls.

In his plea agreement, Steele only acknowledged photocopying the cover sheet of a supervisor-approved report in the case and hand-altering the date and page numbers. He then attached it to another report, bypassing the need to have his supervisor review and approve it.

Prosecutor Paige Clarkson said that amounted to forgery of the supervisor’s signature.

Clarkson said the case will create the need to audit all of Steele’s work since 2001.

Fuck this asshole and his shithead feeling of self righteousness.

This site uses Akismet to reduce spam. Learn how your comment data is processed.

MUSIC TO RELAX TO.

Feel free to contact me with any issues, question, or information. Dawgonnitdawgsblog@gmail.com I take cash donations too.......

This website and its content is copyrighted under DAWGONNIT.COM – © DAWGS BLOG 2019 and managed and licensed under Marty Carlson services, a sole proprietor. And the contributors who supply the writings.

Any redistribution or reproduction of part or all of the contents in any form is prohibited other than the following:

You may print or download to a local hard disk extracts for your personal and non-commercial use only.

You may NOT copy the content to individual third parties for their personal use without express written consent.

You may NOT, except with my express written permission, distribute or commercially exploit any picture, written report, video, or audio content. Nor may you transmit it or store it in any other website or other form of electronic retrieval system or any printed form or manner.

Also note that commenting on this website is highly encouraged, as we allow anybody to have their say, but Dawgonnit.com – dawgs blog has full authority to remove, edit, and sanitize any comments as we see fit. Abuse of the commenting will not be allowed and can lead to comments being removed, and commenters can and will be banned. This includes any commenters that misrepresent their identities and or any other identifiers that may be used.

DAWGS BLOG USES IMAGES AND INFORMATION OBTAINED THROUGH THE INTERNET FOR MY VIEWERS PLEASURE. IF YOU SEE AN IMAGE OF YOURS AND YOU OBJECT TO ITS USE PLEASE CONTACT ME FOR REMOVAL OR ACKNOWLEDGEMENT  AT: DAWGONNITDAWGSBLOG@GMAIL.COM

PEOPLE IN THE WORLD